On dispersing your art to the world,

{I like knowing that pieces of each installation are residing in different parts of the world, spreading the energies of that idea like seeds sown into the wind.} Lauren McAloon, Installation Sculptor, Artist & Facilities manager at The Studios of Key West

I really like the idea from the artist/ curator, and chief paperhanger above answered when I asked if it were difficult to let go of her art after an installation piece was finished. “I have art I made when I was 10-11 years old,” I said, “I think often that the only way to release it would be with a bonfire.” I explained that at one point when I started painting, I would do a painting every day, Ms. McAloon smiled and deadpanned that it would be have to be a really big bonfire.

I am often struck when making art, that each choice to add or subtract an element negates multiple other options or directions. On bad days that knowledge becomes paralyzing, on good days I can notice and move on, or keep track somehow of some of the other ideas to revisit them. That is one of the reasons I loved printmaking as a basis for a series of art pieces. All these ideas and creations have a life cycle of their own from idea to conception, creation, refinement, potentially display, and then…

As a semi-professional artist (i.e. thus far I haven’t sold much, or tried very hard to do so), the creating is what I enjoy. The need to store, and even display the creations stops my process sometimes in that there is no room, or more need for what I want to make. I wonder, with reference to the hoarding tendencies of my family, how much this can stifle both my and my sibling’s creativity in general.

There is a bit more to this as well. I’ve never had children. I am blessed that I have had an ongoing relationship with my husband’s children; I was able to watch them grow from a very young age, and even now I get to “play at” being a grand-mother (or Grammy) with their children. While I enjoy them all very much, there is not a sense that they will be interested in what I would “hand down.” The next generation of Benson’s and Ginn’s will likely be uninterested in any of my wisdoms (unless of course it is found to have monetary value). It is one of the challenges of deciding to become a Step, instead of a blood parent (a subject for another day).

My art, my writing, sculptures, paintings, jewelry, photos; are in the greatest sense, my children. When I have completed a piece, I want to live with it a while, and it while it would be nice to hand them off to another, have them be adopted, set them free, that doesn’t often happen without effort. So, what happens to my misfit children? They languish in my basement & studio primarily. My question to myself is, is this hoarding too?

Part of the purpose for me in this trip South was to be able to spend time both reconnecting with family and helping to prepare my disabled brother for his future. My 88-year-old mother, and all of us as a family have to consider how to best deal with an aging, stubborn, (some read fiercely independent) physically & mentally challenged individual both now, and when my mother, his primary caretaker, is unable to care for him.

Unexpectedly my brother Allan had a fall that necessitated a hospital, then rehab stay just as we were approaching the area by boat. The fall highlighted several things, that my mother was not able to assist him when he fell (he out weighs her by 100lbs.) and that the apartment was unsafe for him to return to. I/we decided that to facilitate Allan’s eventual return home that I would undertake another massive cleanout. 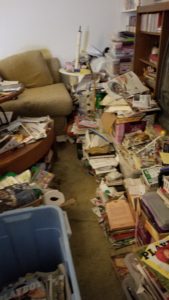 I’ve written about their hoarding issues before, and frankly if they were both content, I’ve been inclined to let them alone with their lifestyle. It’s another family tenant (along with Murphy’s Law) to ‘Live & Let Live,’ Perhaps we (my 2, now one brother(’s)) have been negligent in addressing this earlier.

Whenever I do this massive dig out, and this is number 5, It strikes me how cleaning out our home would be to Robert &/or my step children. What a headache this entails. How many truckloads of detritus to heap onto yet another landfill, not to mention the stagnant energy that all these past musings, both visual and written, are of interest only to me. If I outlive my siblings or mother there may be some interest, and why would any, save some future historian or archaeologist be interested?

In the case of my brother I think his are more a collection of items to stem the tide of going without. A #10 can of safety pins, 27 containers of disposable underwear, 13 spare air fresheners, 25 nail clippers, close to 500 colored pencils, old newspapers in stacks, multiple garbage bag sized snacks, 75 unopened puzzles, hundreds of never opened or viewed, CD’s, DVD’s, VHS tapes, and books & this is but a small part of the “nest” as we call it he feels he must surround himself with. He has a compulsion to wear and use the same clothing items, torn and stained though they are, and to always carry a small holographic collection of this nest with him.

It has taken me 3 weeks of 6-8-hour days with help from my brother and sister in law to clear out and organize most of Allan’s “stuff.” We filled multiple dumpster loads, had quite a few trips to Goodwill, and transferred many items to a storage unit as well. We were all proud of the accomplishment and my brother was able to come home in relative safety, unfortunately in the month since we finished, I suspect the “nest” is growing again.

With the Marie Kondo book” Spark Joy” a rapidly growing conversation in the world I find myself revisiting the need, the desire for the false sense of safety, continuity, and of history that carrying our “stuff” with us provides. I too have been having an internal conversation about what (& how) to let go of.

I love the Shinto concepts underlying much of her de-cluttering philosophy. The belief that kami, or the sacred, exists in everything, no matter how outwardly mundane it appears. (How Shinto Influenced Marie Kondo, www.bustle.com) The divine spark as a soul or spirit in all things, places, natural forces, Animism it is sometimes called, is a spiritual understanding of many older religions. Science too has begun to recognize that energy is what all matter is made of, and energy itself can form and reform into any physical (& perhaps non-physical) forms.

Ms. Kondo states that when she enters a home to be de-cluttered, she greets it as sacred space. With each item reviewed she taps it to wake, & when releasing it says Thank you for all that item has represented. Perhaps the re-cluttering is an unconscious gathering of these energies to protect, insulate, or otherwise fill an empty interior space within. Perhaps also if I were to have approached both my brother’s nest, as well as my own sacred art space, with that respect and honor the de-cluttering would hold.